There Is Something Missing

For many in Canada the Victoria Day long weekend (or commonly called the May Two-Four weekend) is the time to head north to open the cottage.  This weekend is so special because after a long winter the weather is warming up.  People might even be found walking around in shorts and a t-shirt.  For many that weekend was the “unofficial” beginning to summer.  Barbeques are fired up, campfires are enjoyed in the late evening and some people even have fireworks.  For the gardener the “rule of thumb” in the area where I live, is the May two-four weekend is the time to plant your garden.

Another one of the wonderful aspects of this particular weekend is the normal seasonal re-opening of a bike shop in my village of Hillsdale. And for those travelling Highway 93 north through my village of Hillsdale there has always been that landmark that just cannot be missed….the bike shop operated by Rolly and Grace Hallyburton.  You would never find another shop like this.  Catering to the “everyday recreational cyclist” the bikes are fully reconditioned and ready to go usually for much less than what could be purchased at retail.  There is not even a sign out front that says this is a bike shop, but everyone knows!  🙂 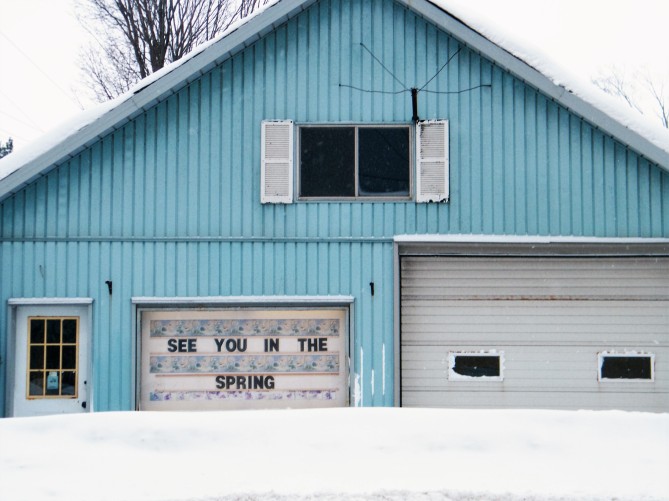 With the sign that says “See You In The Spring”, people look forward to the bike shop’s re-opening in the spring after a long winter. And yes, that is ALL snow in the fore ground!  🙂

The one difference between a typical bike shop and this shop is the work involved before it is even open for business each day. Instead of unlocking the door and turning lights on and you are open for business, every morning at Rolly’s shop involves taking well over 100 bikes of all shapes and sizes out of a storage trailer and setting them up.  It will take two people steadily working about an hour to get them ready for the day.  At the end of the day everything is reversed and the bikes are put away in storage.  Once again it will take around an hour for two people to work steadily. 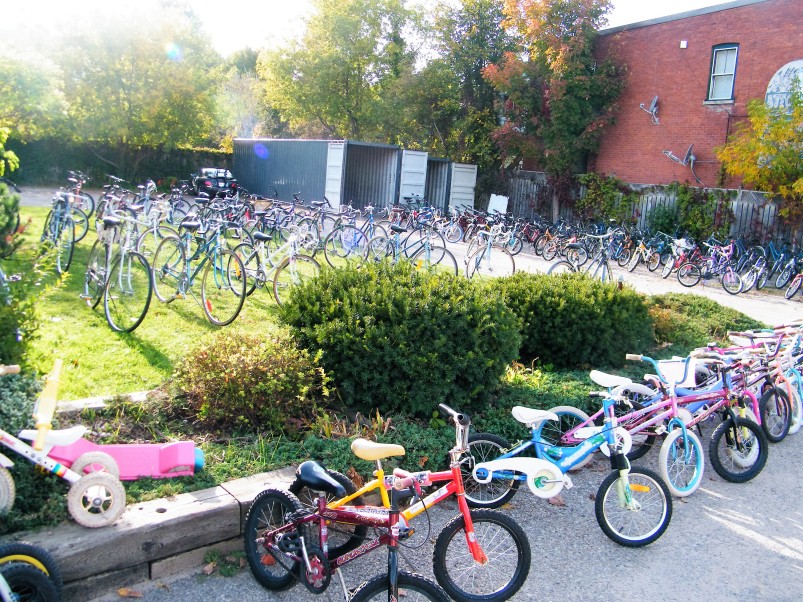 A portion of the selection of the many bikes set up for display for the customer each day. Notice the trailers in the back where the bikes are stored for the night.

I have been involved with the setting up and particularly the putting away of these bikes probably a few hunjdred times.  I did it regularly for two years that I did not have steady employment and now often after getting home from my regular job I would tell my wife “I’m going up to the bike shop to help put bikes away”.  After a stressful day at work, this was stress free for me.  A lot of laughs and  joking around. 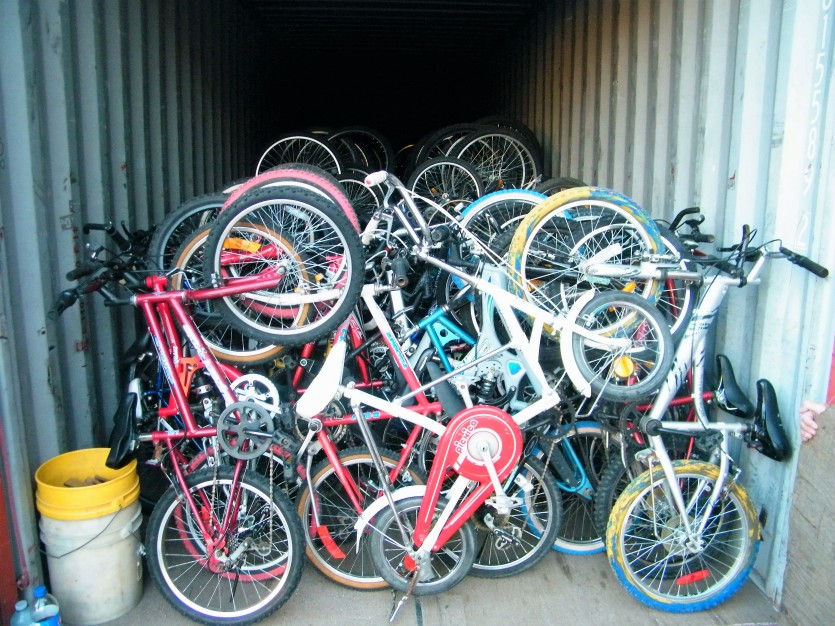 Bikes put away at the end of the day. It is an real art to learn how to tightly stack them without any damage to the bike.  Note a real cool folding classic is at the front of the stack of bikes!  🙂

People are always amazed of the work that is involved with setting up every reconditioned bike ready for sale on the lot, and then putting them away at the end of the day.  But Rolly really wants the best selection for his customers, thus every bike is set up.  And what a selection.  It starts from the small kid’s bikes with training wheels and up to adult full suspension mountain bikes.  There are road bikes, stunt bikes, folding bikes, commuter bikes and often specialty bikes such as tandems, adult trikes and unicycles.  And people will drive long distances to check out the selection of classics that go back over a half a century.  Along with those classics there are the parts in stock for those classics, often extremely hard to find anywhere.  And sometimes city shops will refer customers who come in to a have a vintage bike serviced to Rolly because of his parts inventory, and his knowledge and expertise with these particular bikes. 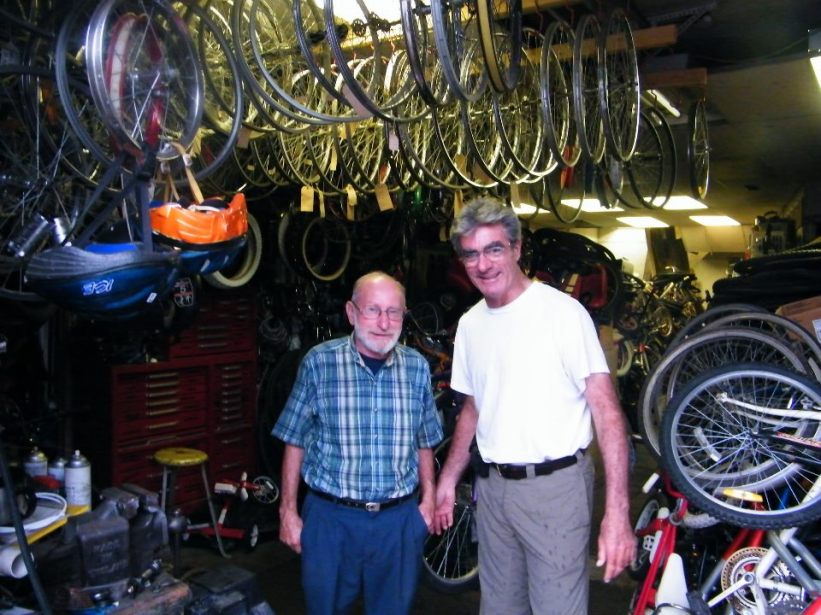 Rolly posing with Jean Beliveau the World Wide Walker. Lots of parts in this shop, many of them hard to find.

The shop has been featured several times in newspapers and on television both on the news and on a roadshow documentary.  One of the greatest joys a few years back for me was to introduce Jean Beliveau (the world wide walker) to Rolly and his lovely wife Grace.  I met up with Jean in Orillia while he was on the final leg of his 75,000k 11 year non stop walk around the world.  When I met Jean to pick him up, the 1st thing I noticed was the tires on his trailer.  They were bald.  I said, “Jean your tires are bald” Jean acknowledged what I said, but did not say anything else.

These bald tires made it on Jean’s trailer to where I met him in Orillia.

But I knew someone who would drop everything to keep Jean’s journey moving ahead.  Our family had a wonderful overnight visit with Jean, and the 1st thing after a hearty breakfast made by my dear wife was to get up to the bike shop for some new tires.  I offered to pay for them, but Rolly would not hear of it.  And he even installed brand new tubes with the tires.

Rolly installing a new tire along with new tubes for Jean Beliveau. This would be the 17th set of tires on Jean’s epic 75,543 kilometer worldwide journey.  Jean is showing Rolly’s lovely wife Grace some pictures from his 11 year expedition.  If no one is able to help Rolly set up or put away bikes, Grace would be the one pitching in those days.

After the tires were installed it was back to Orillia to the exact spot where I picked up Jean the previous day.  I then drove to Barrie, parked the car and walked back to meet Jean half way and we walked together for 15 kilometers to the place where Jean was to spend his next night.  It was such an amazing time to spend that time with Jean.  More information on Jean Beliveau and his 11 year non stop 75,543 km expedition can be found on his website World Wide Walk.

Such a tremendous day walking with Jean.  Those new tires would bring him home on the final leg of his world journey to Montreal after 11 years on the road through 64 countries.  A huge celebration was organized for Jean’s arrival home to Montreal.

After a couple of decades of operating in Hillsdale, Rolly (affectionately known as “The Bicycle Man”) closed down for good on October 10th, 2015)

No one really picked upon the word change, which is what Rolly would have wanted.  Rolly has never been one for fanfare, and was happy there was not any of the hype. After much coaxing from his wife, Rolly has re-retired from what was his bike shop business in his retirement, and has packed away his tools.

Rolly, a gentleman named Al and myself sharing a laugh as we put the bikes away

After over 20 years of seeing all those bikes carefully set up for display, people heading north this spring are noticing that “There is Something Missing”.  Some are even coming into the post office to make inquiries.  There will never be a bike shop as unique and special as this one.  Thank you Rolly and Grace for serving our community over your lifetime.  Not only with the amazing bike shop, but before that as a used car dealer, before that a body shop, before that a second hand shop and before that an antique shop!  And even though sustainability and recycling have become buzz words nowadays, Rolly and Grace have been doing this for decades.  In a throw away society, probably a few thousand reconditioned bicycles were kept out of the landfill through Rolly and Grace’s efforts.

Rolly and Grace have always given back within the community as well as those in need outside the community, always wanting to be anonymous with no recognition or fanfare.  His best bikes that he would have for sale would often be donated for community fundraisers.  And after they closed the huge stock of bikes on the lot were loaded onto a ship container, and sent to an orphanage in the Ukraine.  Before there was one bicycle for the entire orphanage.  Now every boy and girl there can experience the thrill of owning and riding their very own bicycle!  🙂