Below is a picture of the Olympic Stadium, the venue used for the 2012 Summer Olympic games.  For myself, coming from a rural village of a few hundred people in Canada, I can’t even imagine what a crowd of 70,000 people in one gathering would be like.  Let’s hold that thought, as for one last time we return to the blackberry patch. 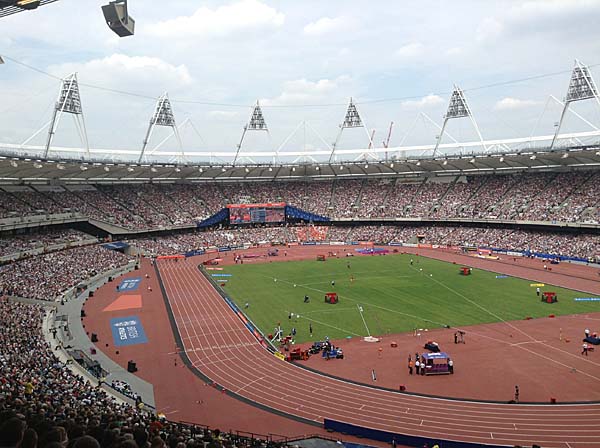 Fall is pretty much here, and the blackberries are finished for another year, but I was able to get a couple more pictures a couple of weeks ago, just before the season ended.  Thank you to everyone who participated in my contest, of guessing what was in that berry patch that frightened me enough, for me to not go in and pick those tasty, delicious berries.  The correct answer was POISON IVY!

So what is poison ivy, and why was I so afraid to enter that blackberry patch?  Well, coming in contact with poison ivy, can cause a severe rash or inflammation of the skin.  The toxic substance involved is urushiol, and is produced within the resinous juices of the leaves, flowers, fruit and even the stems of the poison ivy plants.  Well, how potent is urushiol you may ask?  An illustration from this university website, 1/4 ounce is all that is needed to cause a rash on every person on earth. Remember that Olympic Stadium picture?  Well,  the earth’s population of 7 billion, is in fact 100,000 Olympic Stadiums worth of people.  And 1/4 ounce will cause a rash in ALL those people.  Some more interesting tidbits from that same website:  Five hundred people could itch from the amount of urushiol covering the head of a pin.  For 1 person, 1 nanogram (or a billionth of a gram) is needed to cause a rash.  However the average exposure for a person is 100 nanograms.  That is all very hard for me to get my mind around.

Identifying a cluster of 3 leaves. Image via Wiki How.

So you have decided, maybe it might be a good idea to know what to look for, when you go out picking blackberries.   YEAHHH!!!  🙂  (Just want to know you are safe). What has helped me over the years in helping me remember the features, are word association phrases.  Two examples are, “One, two, three, don’t touch me”, or “Leaves of three, let them be”.  Their main feature is a cluster of 3 leaves (2 going horizontal, and 1 vertical).  You will also notice that there is a longer middle stem on the poison ivy plant. “Longer middle stem, stay away from them”.  The leaves are pointed,  the leaves are most often shiny.  The leaves are most often smooth edged, and often (though not always) the leaves have a notch on one side.  The base of the leaves are rounded, not square. 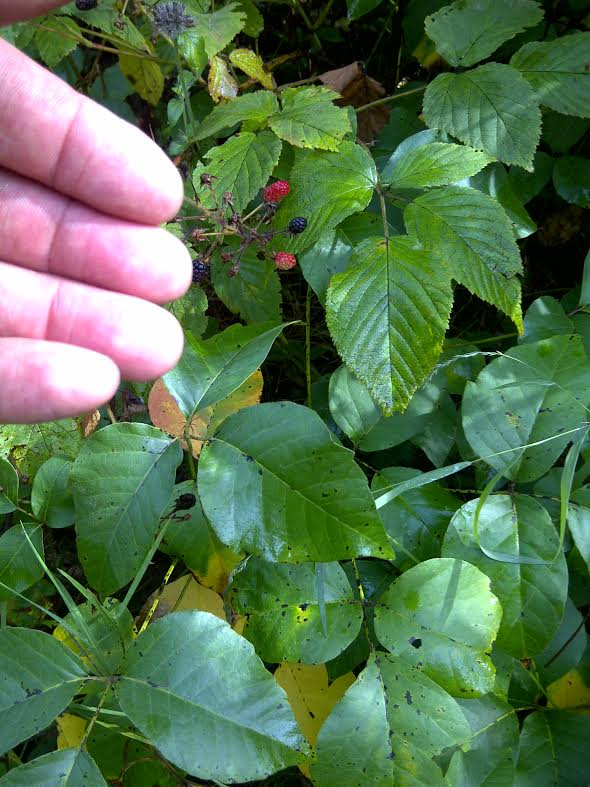 My hand is over top of poison ivy. Notice a cluster of 3 shiny leaves, with a longer stem in the middle. A rounded base, and (usually) a tiny bump, or notch on one side.

Fortunately, knowing these simple things to look for has kept me from literally being “caught red handed”, with a rash from contact with poison ivy while picking berries.  Now getting back to the berry patch picture, the same one used for the contest on the post My Return to the Berry Patch.  It is quiz time.   Can you now identify which are the plants are poison ivy???? 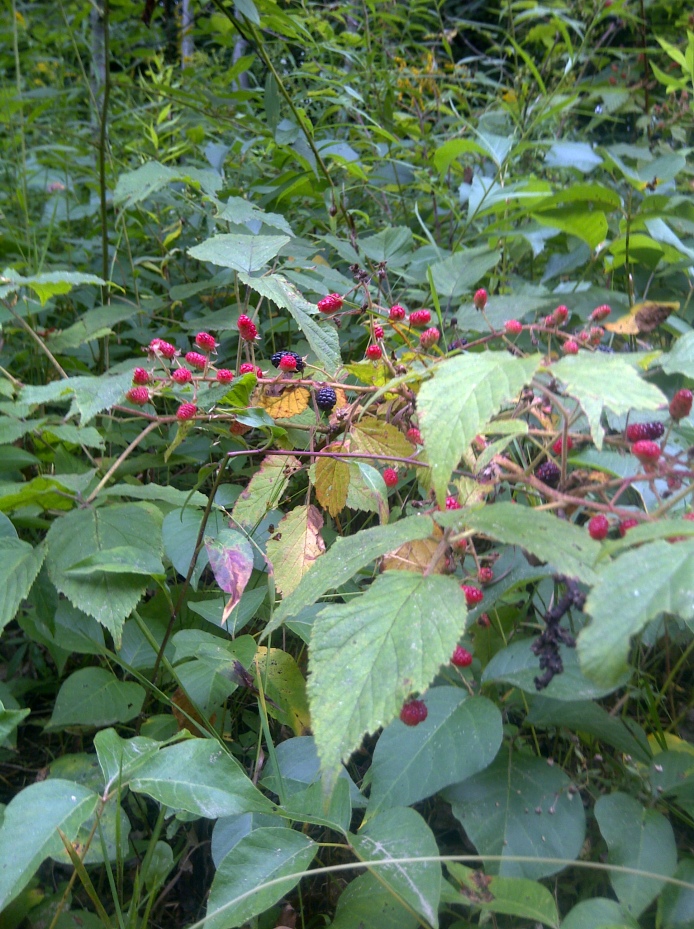 Look for clusters of three, smooth edged, often with a tiny notch or bump on one side.  Also rounded at the base.  This blackberry patch was LOADED with poison ivy and it’s urushiol.  Was not worth risking it!  😦  Can you now identify poison ivy leaves from blackberry leaves? 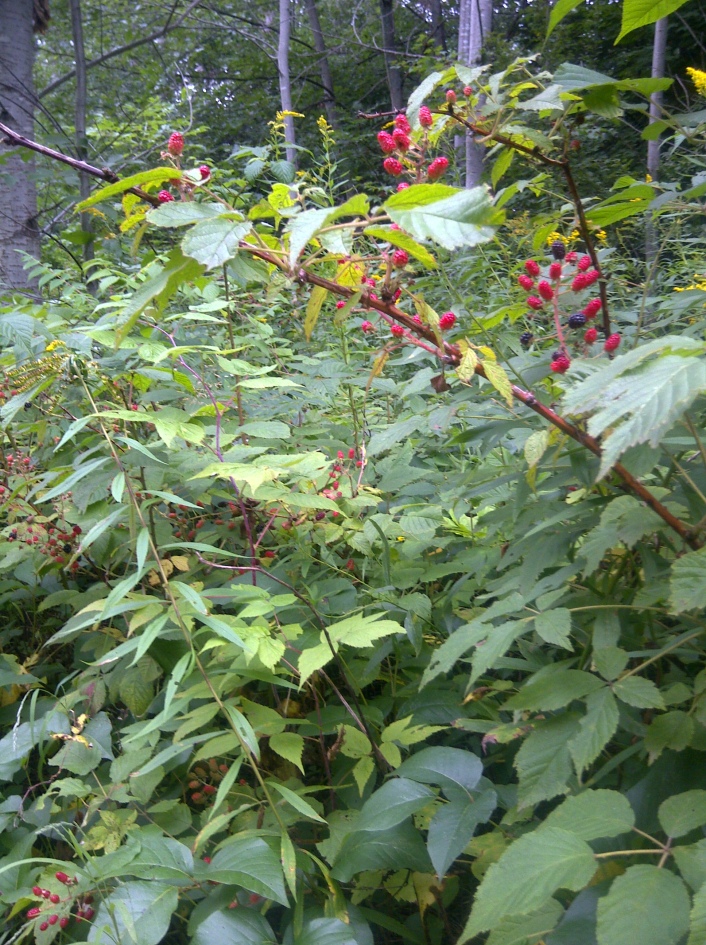 The right side of this photo are blackberry leaves.  Their clusters are MORE than 3 leaves.  Are you able to identify the poison ivy clusters of 3?  “Leaves of 3, let them be”.

In my contest, there were no bad answers.  Every answer was a GREAT answer.  Also, there were no losers.  Everyone who participated was a winner.  For all my contestants, I’m giving you a shout out, and pingback to one of your posts you have written, that I have really enjoyed.  Thank you for your participation, and for making this a wonderful contest!  🙂

My first shoutout goes to Barbara, from the blog Courage Through the Storm.  Her writings reveal her heart for fellow humanity, and also for the beauty of the world around us.  This fairly recent post, called “Beautiful Autumn” had such a calming effect on me.  I could feel my blood pressure drop while slowly reading how nature slows down, coming into the fall season.

Angie writes for the blog, Outdoor Running Adventures. Coming from the wilds of northern British Columbia, Canada, Angie shares her adventures of running with her energetic dog Kobi in a land inhabited with bears and wolves.  A post that gave me goosebumps was actually called “Running With Wolves“.   It is about Kobi’s inbred intuition on a day when she knew there were wolves, and immediate danger nearby.

I always enjoy dropping in to visit Karen’s blog at Fill Your Own Glass.  She describes herself as a “reformed pessimist”.  Nowadays,  she always shares a positive perspective on life, whether through her writings or her valued comments. Written a couple of months ago, the post “A Reformed Pessimist” highlights some noticeable differences in Karen’s life, as she changed from pessimism to optimism.

As a blogger, you really get to appreciate the time and effort involved, when a fellow blogger leaves a generous, well thought out and articulated comment on your posts.  My Tasmanian Traveller friend does just that. The blog, “Walking the Derment River” chronicles the journey of walking this picturesque river.  The post “Nature is Cheaper Than Therapy” highlights some beautiful landscapes along the journey!

Author and world traveller Jane Byne has more than just visited Africa.  She has spent a considerable amount of time living in Africa.  Personally, I am a very gullible person, and am not sure how I would manage in some of the situations Jane has encountered.    The post “Pandemonium and Dust“, got me caught up in the emotion of receiving a simple parking ticket….but in Kenya, Africa.

Celia originally moved from a small town in Northern Queensland to teach in one of the greatest metropolitan cities in the world, Tokyo, Japan.  Her blog, “Celia in Tokyo” shares her experiences, combined with amazing photography.  The one post that really impacted me was “3/11 Quake: Living With Hope“.  Celia had moved to Japan, just a month prior, to when the massive earthquake and tsunami hit Japan.

Kim from the blog “Kim Runs Miles With Smiles”, blogs on “BlogSpot” and is one of the several bloggers I enjoy dropping by, who have a platform other than WordPress.  I learn a lot about running from Kim’s post.  I am just a runner, but some posts on Kim’s blog, such as “Picking Up My Pace“, shows that training can actually get quite technical.

I’m pretty hard pressed to pick 1 post from Indah’s blog, “Indah’s: Travel Story and Photography”.  The perfect title.  I learn so much through Indah’s travel stories.  And her photography, wow, both on land and underwater, her photos should be in magazines.   Her post, “Nine Endangered Marine Species” gives a glimpse of her underwater photography, but also shows her passion in her writings for needed protection of endangered species.

As a mother of 9, I don’t know how Mar finds the time to blog in her blog, Momdeavor”.  But her blog is always so fascinating, and there is always something for everyone.  At my work, in the office area,  there is a living wall.  I am always amazed how calming it is, when I go in to the office area, by that wall.  Mar’s post called “Longwood Gardens–The Green Wall“, talks about the largest green wall in North America.

I only discovered Staci for the 1st time very recently beside the berry patch, with a coffee in hand, trying to determine what the scary thing was in the patch.  Originally from Canada, since 2000 she has working in Brazil with the mission organization “Youth With a Mission”  Her blog “A God Colored Girl in a Grey World” has poetry, thought provoking posts, and even has her beautiful music (check out her music player).  Her post “Words” was a challenge to me to always be careful what I say.

Tricia comes from the San Diego area and writes pertinent and timely posts from a Christian basis on her blog “Freedom Through Empowerment”.  I can identify much through her post “Good Me, Bad Me“.  Why is it that some days I feel like I am on top of the world, while other days, I definitely feel like I got up on the wrong side of the bed?

Holistic Wayfarer preferred cash instead of the prize I was offering, but was still kind enough to drop by and leave a comment.  She has a HUGE following on her blog, “A Holistic Journey”, and her great posts reflect that.  A fairly recent post is called, “Maybe We Don’t Want to Listen to Your Story“.  It is a powerful reminder that we don’t know the story behind many forced smiles, and the struggles behind the walls of each home!

A blogger named April and myself both have family similarities. We both had 4 children in our respective families in just over 6 years.  That’s where the similarities end, when it comes to our blogs.  As much as I try to beg and plead, my family have never wanted to be a part of my blog.  They just want to keep themselves low key and I have to respect their wishes.  April’s blog is ALL about family.   Her blog “Stories of Our Boys” is about raising 4 boys and homeschooling at the same time.  April often praises her hubby Alan (which I love).  One of those posts is “4 Flashbacks and Today For Our 13th Wedding Anniversary.”

Well that is it, except once again I would like to congratulate our main winner Sarah. (please remember though, EVERYONE is a winner).  For those who are now following Sarah at the blog “See Tomal Run”, thank you.  Her following has increased 125% since she was announced a winner on the interview post,  “And the Winner Is….”.  Her post “About Me: Who I Am, What This Is, Why I’m Here” is a great introduction to Sarah.

Thank you everyone for participating in the blackberry patch contest.  Hopefully now you can positively identify poison ivy.  Trust you will not be “Caught Red Handed”  🙂

Poison ivy is a beautiful plant, but please stay clear of it!  Not worth the risk!

To conclude, I have one last picture of more poison ivy.  It was on the same trail, just a couple hundred metres from the berry patch.  It is actually a very beautiful plant, one that a person not knowing what it was, might think of digging a few plants up and replanting in his or her garden.  But do not. Or returning to your home country with some of it stashed in your suitcase……haha!  Please do not. This is greatly illegal, and I am sure you would not be very popular within your home country, if it becomes an invasive specie there!  Remember, “Leaves of three, let them be”,  “Longer middle stem, stay away from them”.  🙂