The Road to Wanaka

One of the things that really fascinate me with New Zealand is it’s similarities with Canada.  Both countries have the ocean, mountains, rainforests and prairies (called plains in New Zealand). The only difference is that in New Zealand, everything is so condensed.

Map of New Zealand South Island. Our journey of this post would take us along the coast from Fox Glacier to Haast and then inland to Wanaka. Image Source

Canada is so vast that it has been 30 years since I have seen the vivid aqua blues of glacier fed rivers and lakes.  I had read about how beautiful they were in New Zealand and was thrilled that the next part of my journey would contain those same vivid blue glacier waters. It would be so wonderful to once again be immersed in this beauty on the Road to Wanaka.

Back on the road again after a wonderful 3 days at Fox Glacier.

After spending a wonderful 3 days in Fox Glacier on the wild west coast, my daughter Naomi and I packed up our rental car to drive to our next destination which was Wanaka.  On my internet search I learned that the travel time required would be 3.5 hours to cover the 261 kilometres on State Highway 6. This would give us an opportunity to take in a few stops along the way.

Thunder Creek Falls was well named. Loved hearing the roar of the water!

Our 1st stop was at Thunder Creek Falls.  It was very “spur of the moment”.  We saw a sign announcing that they were straight ahead and decided it would be a good opportunity to stretch our legs. Fed by the glaciers of magnificent Mt. Aspiring National Park these falls drop 30 metres out of a notch in a rock to the river bottom below.  It was a short hike, only about 5 minutes off the road.

My daughter Naomi. We had such a great time.

Back on State Highway 6, the road crosses what is known as Haast Pass, which crosses the spine that separates the very rainy west coast from the drier leeward plains of Otago and Canterbury. Not far after Haast Pass we stopped at out next destination…The Blue Pools.  They are about a 15 minute hike in from the parking lot. 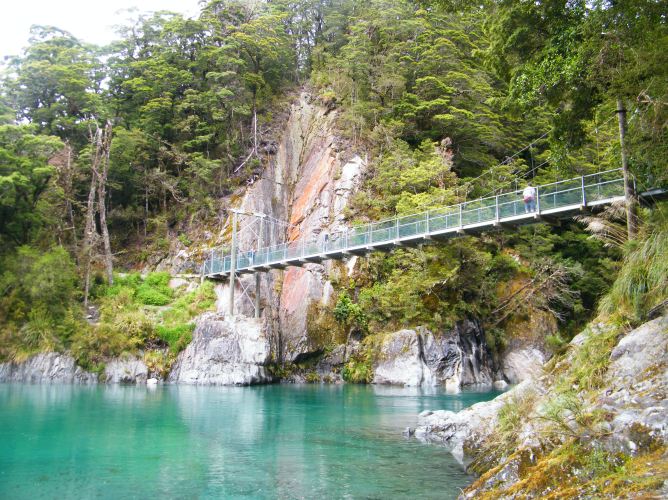 Swinging bridge and unique turquoise blue colour of one of the blue pools.

The Blue Pools are found where the Blue River and the Makarora Rivers join.  Also very well named, the pools get their name from the unique aqua turquoise blue colour of the water.  Best to visit when it is sunny, as the sunlight helps bring out the unique blue in the water. 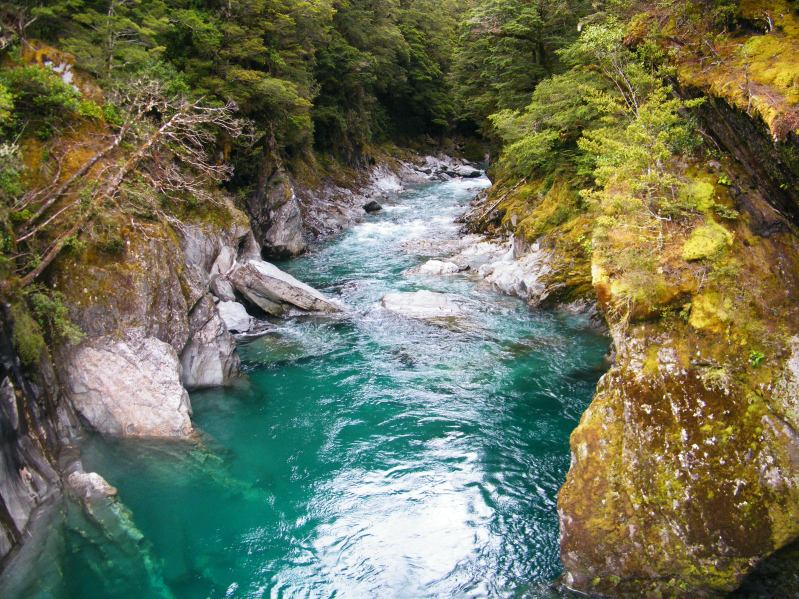 The cold , aqua blue waters of the Blue River fed from the snowfields of Mt Aspiring National Park.

Once again it was back on the road again.  Despite the two very worthwhile stops we were making very good time.  Naomi and I started discussing while driving the possibility of climbing Roy’s Peak just on the other side of Wanaka on this very same day.  This was December on the South Island of December, and it did not get dark until after 10:00 pm. Quite the contrast from where I had flown from in Canada where it was getting dark around 4:45 pm. 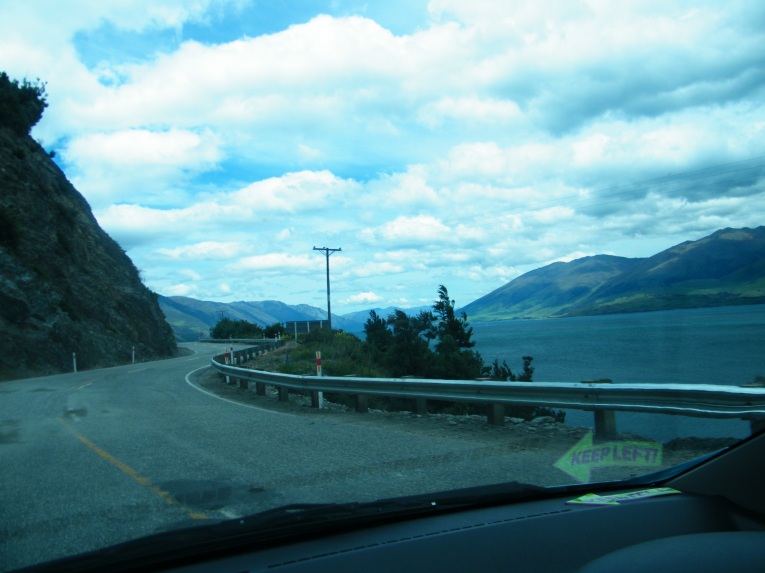 Back on the road again. The further east we go the drier it gets with less vegetation.

We arrived at our hostel in Wanaka at 1:10, but check in was not until 2:00. Instead of waiting around we decided to make a quick stop at the ranger’s office and then head to the trailhead parking lot for Roy’s Peak.  The ranger told us to be prepared to dress warmly.  The mountain is very exposed and it was quite windy on this day. 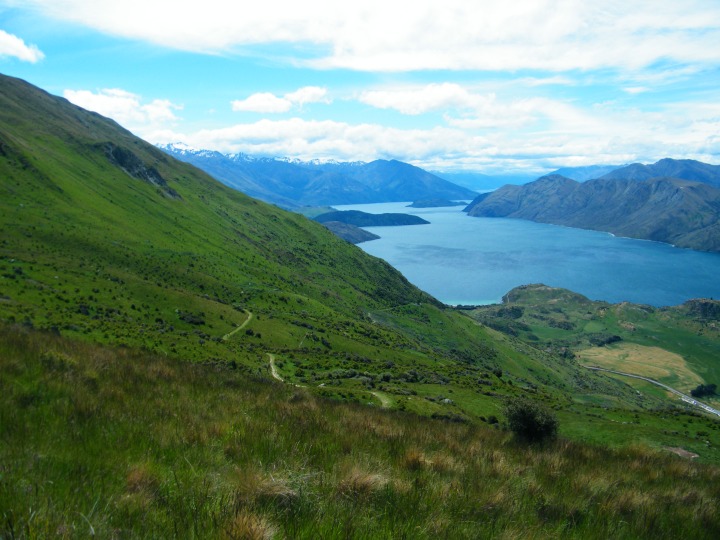 Looking over the trail we have so far covered we are probably around a third of the way up Roy’s Peak.

Roy’s Peak was rated “hard” as a hike.  It is a 16 kilometer return hike with an estimated hike time of five to six hours. The summit is 1578 metres (5177 feet).  The total altitude gain is said to be 1300 metres.  This would be similar to a lot of the ultras I have done, but with only 16 kilometers the actual travel distance would be much shorter.

The higher you climb, the more spectacular the views become. Looking across over Lake Wanaka.

It never did get as windy as I was prepared for, but it is better to be more prepared than less prepared.  One recommendation is take lots of water with you.  There are sheep grazing on this land, so there is not any sources of reliable fresh drinking water to be found. 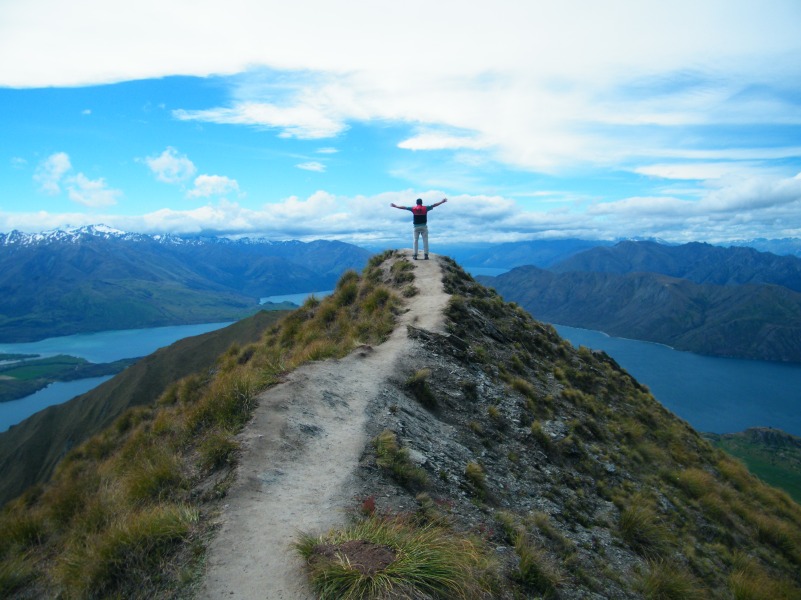 Amazing views at the top of Roy’s Peak! 🙂 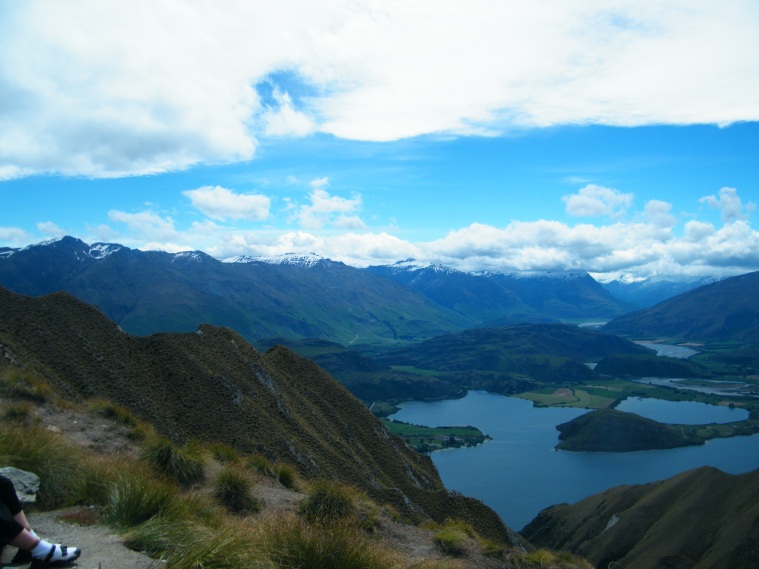 Another view from the top showing the snow capped peaks with their summits in the clouds in the distance.  Those mountains are in Mt. Aspiring National Park (a World Heritage Site).

Going down it was much quicker.  It only took us an hour and fifteen minutes to descend.  The round trip hike was rated at five to six hours, but Naomi and I completed it (including 15 minutes on top) in three hours and forty five minutes. We were pushing fairly hard, but always hiking.  Never running.

What goes up must come down. The view overlooks the town of Wanaka where I would be spending the night. This area is so much drier from where we drove from on the west coast of New Zealand.

Was glad to get back to the car.  The one litre of water I took with me was not nearly enough and I was quite dehydrated by the time I reached the bottom.  Roy’s Peak was actually our 3rd hike of the day.  It was great to check into our hostel, rehydrate and have something to eat before our adventure the next day.

I located a couple of springs on the hike but was uncertain on how safe the water was.  There were sheep grazing, whose presence could affect the water quality.

I loved the town of Wanaka. With a population of 3,000 it has a small town feel.  It is much more laid back than Queenstown (which is well known as the adventure capital of New Zealand).  The many adventure sports found in Queenstown can also be found in Wanaka as well.

Our hostel in Wanaka.

Amazing view from just across the road from our hostel.

Always love meeting new people in the hostels.  At the hostel in Wanaka, one of my roommates was an Australian mountain climber who had just come down from a 5 day expedition of climbing Mt. Aspiring with the world famous New Zealand guiding company Adventure Consultants. We talked for a good hour. He was pretty wiped and was asleep by 8:00 pm (either from his climbing expedition or his conversation with me…lol).

All those enticing brochures of mountain expeditions around the world found in the office of Adventure Consultants, based at Wanaka.

The following morning it was check out and then the drive to our next destination in Mt. Cook National Park.  But before we left Wanaka we made a couple of stops.  The first stop was to the office of Adventure Consultants.  It has been 33 years since I have done any serious mountain climbing.  And I do have that dream of one last major climb before I die.  This very reputable guiding company does all the major climbs including each of the 7 summits.

The last stop was something Naomi was very excited and proud to show me.  It was to see the world famous Wanaka Tree.  It is lone solitary tree that is growing all alone out of the water of Lake Wanaka. It is said to be one of the most photographed trees in New Zealand. You will have to do some research to find it, as there is very little signage directing you to this beautiful, lone solitary tree.  My daughter Naomi was such a great travel guide who knew the way and drove me right there.

Thank you for coming along for the ride.  It was a blast!  🙂