Is It Springtime Yet?

Picture taken early May, the 1st sign of new life, since the frosts from early Oct. last year, 7 months ago.

It’s May 24th.  The snow has disappeared.  The frozen lakes have melted.  The sun is shining.  The birds are singing.  The grass is growing.  The crocuses and daffodils have greeted the world with cheery flowers.  The leaves have burst out from their tight wintertime buds. 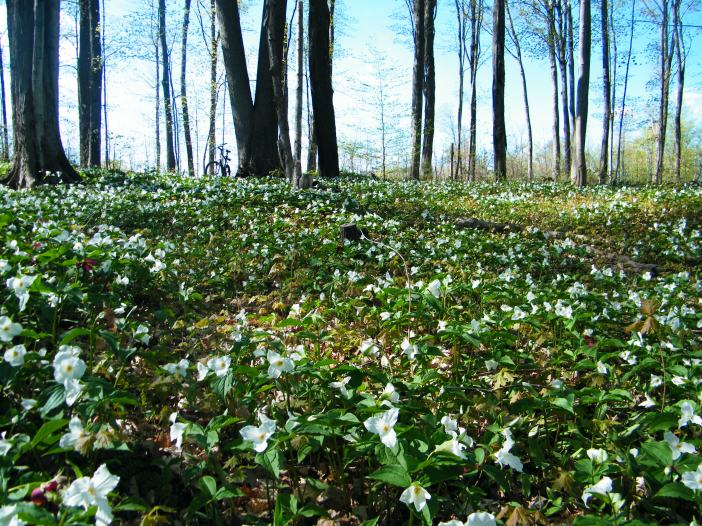 The beauty of the White Trillium taken recently in the hardwood forest just outside the village where I live.  Can you spot my bicycle?  🙂

Springtime in Canada is a long, gradual process.  Seeing springtime posts from fellow bloggers from way back in March really has intrigued and fascinated me.  While my fellow bloggers were enjoying flowers and green grass, we were still buried in snow up here, when those posts were written. But I knew in the weeks ahead spring would make it’s way up to my neck of the woods.

While some fellow bloggers were having tulips and green grass, we still have a lot of snow in the early part of March.

The later part of March, and into the 1st part of April, sees days above freezing, with still cold nights. The snow was melting, which meant the sap in the trees of our maple forests was flowing.  As a child my dad would tap the maple trees in our forest, collect the dripping sap in metal pails, and then boil down the translucent liquid in huge open kettles over an open fire.  The memories of distinctive smell of the syrup as it began to reach it’s point of perfection, adding another log to the fire, and talking.  When it boiled down to a certain point, we would pour fresh hot syrup onto the cold snow, and it would transform into a gooey taffy.

We were able to produce a couple of gallons of syrup for our families needs, for some people, producing maple syrup is a livelihood.  According to The Canadian Encyclopedia, there are 16,000 maple syrup producers in North America, with 80% of them from Canada.  Canada produces 79% of the world’s maple syrup.

One such producer is John Williams from Williams Farm.  I have known John for many years, and really admire his respect and care for the earth and the environment.  In the summertime his farm produces organic produce.  The Elmvale Maple Syrup Festival is usually held the last week of April each year, this year it was held on April 26th.  It is spring on the calendar, but even then you don’t know what to expect.  This year we were greeted with glorious sunshine,  but the day before we had a significant snowfall, not totally unusual.  It melted the next day, and by the end of April the snow is all melted, and the lakes are free of ice.

John Williams and his son at the booth at the Elmvale Maple Syrup Festival.  A sunny, but seasonal cool day.

May is the return to green grass, and leaves that return on the once dormant trees.  The leaves are such a welcome sight, after 7 months of dormancy.  With the weather warming up, the gardeners are very eager to get things planted.  But the weather is still too unpredictable for me as a gardener, and it is not unusual to have a killer frost, such as what we had a night ago.

Heavy frost the morning of May 23rd.

Once I flip my calendar to June, I can probably say that spring has FULLY arrived.  I can plant my garden, and look forward to reaping the organic produce.  There will be lots of running, cycling, hiking and camping in the weeks to come.  Summer season is very short lived in this “Great White North” called Canada, so if you don’t hear much as much from me on my blog, you know where I will be!  🙂

Thanks for reading, and all your support!  🙂