Growing up as a child, it was every kids dream job.  The chance to learn responsibility. Most importantly, to be able to earn money in order to buy things on our want list. Growing up on a farm, I was so envious of those city kids. Particularly the ones who held down paper route jobs.  For the city kid, these jobs were extremely hard to get. But once they got a route, they had it made.  To work only a handful of hours a week, and earn money to save up for incredible items such as a baseball glove or maybe a pup tent. If you are disciplined enough to not spend anything along the way, perhaps you could buy one of those fancy bicycles in the Simpson Sears catalogue.  Easy credit was just not available for paper boys. 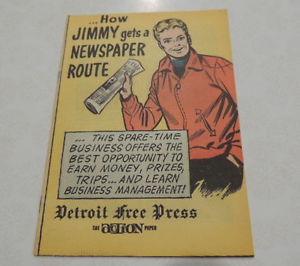 Even as “country kids”, we had our own way of making money. Scouring the country roads looking for refillable pop bottles that people would throw out of their cars was very popular.  For every empty pop bottle returned to the local General Store, I would receive 2 cents.  If I brought 10 bottles back I would receive 2 dimes.  If I brought 50 bottles back, I would receive a dollar bill.  But I had a major dilemma that was eating me up.  The bicycle I wanted was $45, and in order to purchase that bike I would need 2250 bottles.  I explained to my dad that this was literally impossible.  With other country kids scouring the country roads looking for those same pop bottles that turned into cold hard cash, there just was not enough bottles to be found.

For nostalgic sake I got these vintage pop bottles at a garage sale last summer. What I used to get 2 cents as a bottle return 45 years ago, now is worth $3.00 and up.

My dad understood my predicament.  So he got my brother and I to hoe his potato crop for weeds.  We had 15 acres of potatoes on the farm, and so he got my brother and I to hoe the potatoes for weeds over the summer holidays.  For my dad it would have been a win-win situation.   My dad would have weed-less potato fields without any spraying for weeds. My brother and I would learn the value of working for a dollar.  It was extremely hard work, but with the 10-15 cents a row (depending on the length), I was able over 2 years to save up and buy my very own bicycle out of my own hard earned cash.  It was a 3 speed Mustang with “monkey bars,  banana seat and a sissy bar”. How I loved that bike and  was so proud of it, because I worked for it.

A bike similar to the one I owned, a CCM Mustang. Loved it, and how I wished I still had it.  These bikes are now highly prized and collectible.  A restored bike as this is worth several hundred dollars. Image source.

Fast forward a couple of decades.  I am married, starting a family, and have just moved into a small country village.  As a new father I was awestruck, yet overwhelmed of the road that laid ahead.  What values was I going to teach my children?  Would there be much opportunity for my children here in this village?  Yes, there were glorious opportunities here.  There were paper routes, but would my kids ever be given that chance.  It was every kids dream job, so paper routes were extremely hard to get. Who could ever pass up the opportunity to work for some money and buy the things you want.  Once kids got their paper routes, they did not ever want to give them up.

From the archives (over 21 years ago) when my 2nd child (oldest son) was 1st born. He is now a strapping 6’6″ young man who works in a machine shop.  Parenting is such an enormous responsibility. Praying for God’s strength and guidance in raising this precious child.

Then news came around that shocked the community.  A paper route vacancy had come up in our village of Hillsdale.  But sadly our kids were only 3 and 1. Way too young for their own routes.  Unsure if this opportunity would ever come around again, my wife decided that she would try out for this position. And if she got it, she would hand it down to our children when they got older.  She is sheer genius.  Knowing this was going to be an extremely tough competition, she polished up her resume perfectly. And refined her job interview skills to convince her interviewers that she was right person to fill the vacancy.  She got the job.

The job interview. I can’t imagine my wife’s interview was this intense, but she did get the job!  🙂  Image source.

Her first day on the job was her orientation.  She was the only adult carrier in a room full of about 50 kids, where they learned the rules and requirements of the job.  There was much responsibility.  Flyers had to be individually sorted and inserted into the newspaper, then everything rolled up neatly and tied with an elastic.  Delivery was right to the door, out of the weather, standing it on edge and leaning it against the house.  No cutting across people’s lawns.  Everything had to be done by 6 P.M. sharp on the 2 delivery days, Tuesday and Thursday, because stores had their sales that start 1st thing Friday morning.

The newspaper was to be delivered before 6 P.M. Tuesday and Thursday to each house, placing it on end immediately beside the door.

The job was much more labour intensive that I expected, mainly because of the sorting and inserting of flyers.  Sometimes up to 30 flyers had to be sorted, with each of the 36 papers receiving one of each flyer.  But as we got more efficient , the sorting part did become quicker.  This was going to be a great opportunity for our children.  And eventually it did come the time when the oldest 2 children could take over the route.  Because they tagged along mostly with my wife Lynne for those few years, it was an easy transition.  As time went on, it seemed that more and more routes were being given up and becoming available.  It seemed that paper route delivery was losing it’s luster.  I don’t know the reason.  Perhaps the attraction of video games.  Or maybe instead of working to earn money to buy something, kids were simple given the item they wanted from their parents or grandparents. Or the money needed was acquired from Christmas and birthday gifts.  In order to make the paper routes easier and more appealing, the publisher had the papers come pre-sorted with all the flyer sorting done.  All we now had to do was roll them, stuff them in the bag and head out the door.  It made the job so much easier.  The hardest part had been the sorting, and it was now all done with the same pay of $35 a month.  With the sorting now done it would take about only about 4-5 hours a month to make the deliveries (less than half the time as before). 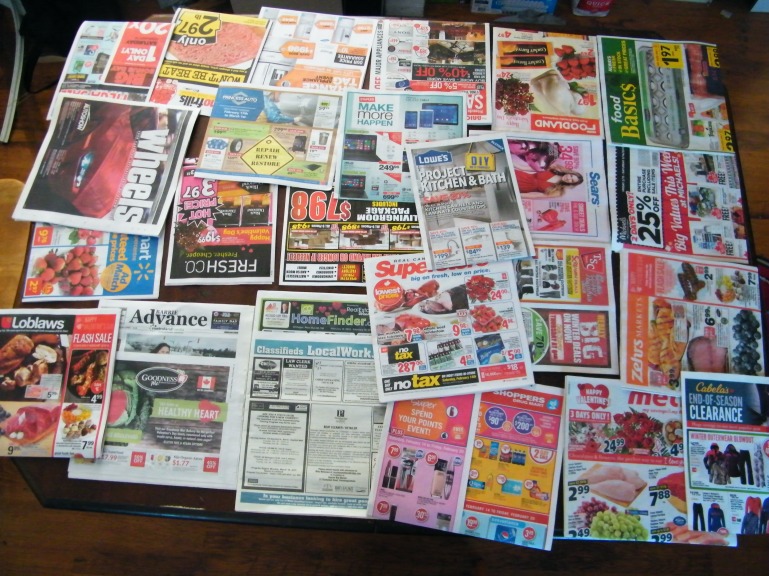 The hardest part of the paper delivery job was sorting and inserting flyers.

As our children got older our youngest 2 took over the route, and then the youngest by herself.  For the last few years we were the only hand delivered paper route out of the original 8 routes in all of Hillsdale.  They were never able to find replacement newspaper carriers.  There was constant advertising trying to recruit new newspaper carriers. Flyers were inserted into the papers looking for paperboys and papergirls. But it was a job no kid wanted anymore. All the other routes had their papers thrown out the window of a moving vehicle. Sometimes the paper would roll into the ditch.  In winter it would be buried in the snow, only to be “discovered” when it jams in the snow blower. Breaking the snow blower in the process.  The driver was just doing what he was supposed to do, and the responsibility was on the homeowner to find the buried newspaper before they started to snow blow.   In one last attempt to attract new paper delivery entrepreneurs, the publisher reduced delivery to Thursday’s only. But there were still no one interested.

Another picture from the archives of my 2 oldest (now 23 and 21) waiting patiently for either my wife or I to come out with the bags of papers and walk with them while they delivered their papers. Such tough warriors. Sunshine, rain, sleet, snowstorm they did their route faithfully. 🙂

Eventually my youngest daughter stepped down from her paper route.  She had gotten extremely busy as a much wanted babysitter in our village, and I was very proud of her.  My wife then decided she would take back the route she started 19 years prior.  She would get some exercise (and the $400+ a year for her efforts was not too shabby either).  🙂  About 6 months later the person who dropped off our bundles for many, many years resigned.  He was also the person whom those last few years delivered the other 7 routes by throwing the paper out of his car window when the other routes were not filled.  The new driver did not want to drop off bundles at our place, but wanted the route himself.  As a result, my wife got a notice from the newspaper publisher that her job would be terminated.  After nearly 20 years of faithful hand delivered newspaper delivery on our street from my wife, all 4 kids, and now back to my wife, the paper girl’s job had become redundant. 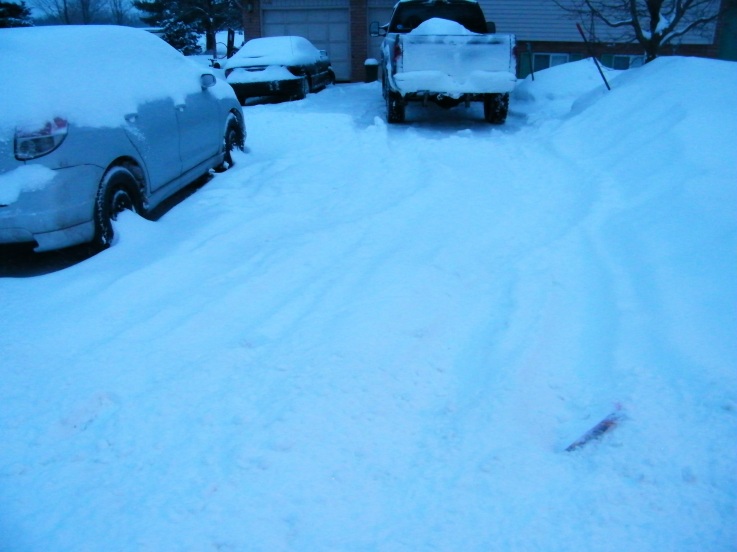 Having the newspaper buried in the snow is a major issue for those homeowners with snow blowers. This one is only  partially buried on the right.

If the newspaper ends up in the ditch, you will not likely find it until spring.

It was a very sad day indeed to read that termination letter.  More than likely there will never again be door to door newspaper delivery from entrepreneur paperboys and papergirls in Hillsdale.  But when I look at the positive, the paper route had served it’s purpose with all 4 of my children.  I was glad they had that opportunity and I am so proud of the young adults they have become.  Hopefully there will be something for the next generation to learn the value of money.

Are there still paper routes in your part of the world?

What was your first job where you earned money?  Were you a spender or saver?

What things did you do as a kid, that no longer happens in society? (an example for me was looking for refillable pop bottles in roadside ditches)

Is there anything you used to have as a kid, that you wished you still had?